We are excited to announce the release of Gradle Enterprise 2017.1. This release includes many new features and bug fixes, further expanding the build insights that build scans provide you and your team. Here are some of the highlights of this release. Contact us if you’re interested in a demo or a trial.

Dependency changes between builds can be a common source of problems. For example, upgrading a version of one library can unintentionally bring in different versions of transitive dependencies into your project. In turn, these newer versions can cause you all kinds of frustration by breaking compatibility with other libraries that your project uses.

The new build comparison feature allows you to quickly find dependency changes between builds, including differences in transitive dependencies.

You can easily select two builds to compare:

And quickly see the dependency differences between the two builds: 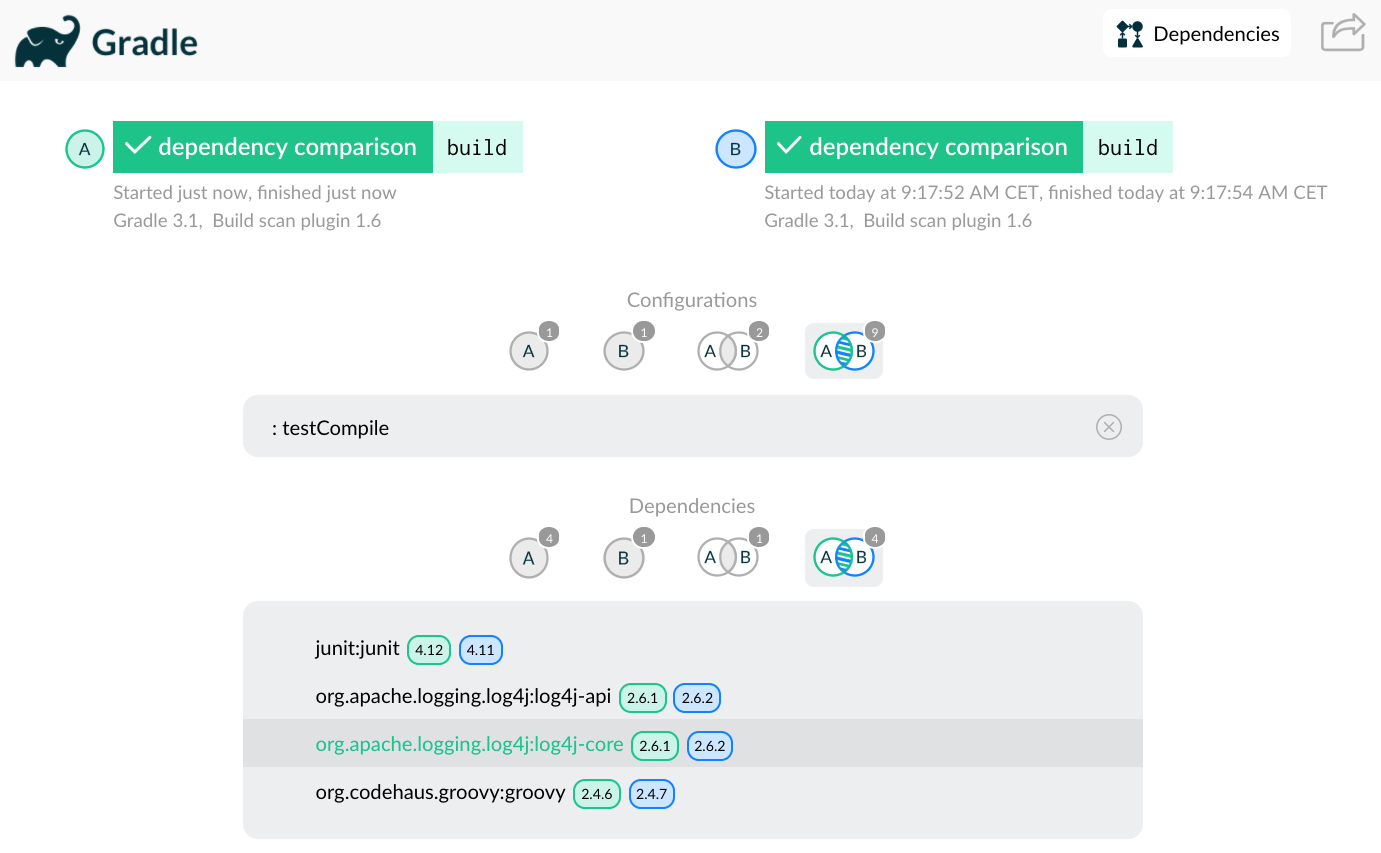 Visualize your build’s task execution with the timeline

When trying to make your build faster, it can be really helpful to know whether all processes are utilized efficiently. Are there optimization opportunities such as long-running tasks that could be split into smaller tasks and run in parallel? To find these optimization opportunities you first need to identify where the bottlenecks are in your build.

The new timeline feature gives you a visual representation of the tasks executed during your build. Using this visualization you can quickly identify bottleneck tasks in your build, places in your build where you could speed up execution by running more tasks in parallel, and other optimization opportunities.

You can also filter tasks by name/path, type and more, making it easy to inspect and highlight particular tasks.

Try out the timeline with this example scan.

Time spent downloading dependencies can have a significant impact on your build time. The new “Network Activity” tab in the “Performance” section shows all the downloads triggered by dependency resolution in your build, including the size of each download and how long it took.

Also, you can see the overall number of downloads in your build, total download size, and average download speed across the downloads to quickly gauge overall network performance during your build.

This feature requires the upcoming Gradle version 3.5 and build scan plugin 1.6 or later.

Integrate your build data with other systems

The new Export API provides a mechanism for consuming the raw build data that powers build scans. It is a HTTP interface based on Server Sent Events (SSE) that supports real time data integration. Libraries for consuming SSE streams are available for most programming languages.

The video below demonstrates a real time build duration dashboard built on the Export API. The code for this is available as part of the gradle-enterprise-export-api-samples repository on GitHub.

See why a task wasn’t cacheable

Gradle 3.3 introduced the build cache feature, which saves you time by reusing task outputs from other builds without needing to execute the task on your machine. For a given task to use the build cache, certain conditions must be met. Gradle Enterprise now indicates which tasks are cacheable and not cacheable.

To give you the opportunity to make more tasks cacheable and improve your build performance, you can see the reasons why tasks were not cacheable. The “Settings and Suggestions” tab of the “Performance” section now indicates if there were tasks that were not cacheable.

And in the new timeline view you can search for cacheable and non-cacheable tasks as well as see why individual tasks were not cacheable.

Try it out with this example scan.

Gradle can save you build time by not re-executing tasks that don’t need to be executed again. For example, tasks that are already up-to-date, or where the outputs can be pulled from the build cache.

The “Task Execution” tab of the “Performance” section summarizes which tasks were executed and which were avoided. The summary gives you an understanding how well cacheable your build currently is, making it easier for you to find optimization opportunities by tuning tasks to make them cacheable. You can also click from the summary into the timeline to see all tasks in a particular category.

Try it out with this example scan.

Find builds by absence of a tag

You can annotate a build scan with one or more tags to easily categorize the build. For example, to indicate which builds were executed on your continuous integration server.

Previously you could find scans that had one or more specific tags, and now you can also do the inverse - find scans that don’t have a specific tag. To do that, use the not: prefix when searching tags. For example, if you tag all of your continuous integration builds with the “CI” tag, you can find all non-CI builds by searching not:CI.

Please see this Custom Data in Build Scans post for more about how and when to use tags.

Gradle Enterprise gives you the ability to find exactly the builds you need by filtering builds by project name, start time, outcome, and more. With the latest release, searching for build scans is now much faster - especially when you are searching through a large number of builds. This makes it faster to find exactly the builds you are looking for.

We hope you are as excited as we are about these great new features. Contact us today for a trial! You can also check out the release notes to see what else is new.